One of the fun parts about living somewhere, anywhere actually, is discovering good food ‘joints’ in your area. Living around Los Angeles, we have so many, we tend to take them for granted: In and Out (burgers), The Hat, Phillipe’s, or my fave, Chano’s El Loco (pastrami), and too many food trucks to count, just for starters.

A locally made, and nationally misunderstood product, SriRacha Chili Sauce, is made here as well. While many people think is is imported, it is actually made from locally grown jalapeño peppers, right here in Irwindale, California, not far from Irwindale Speedway, where the PH4L race car competes at Irwindale Speedway.

It is also not common knowledge that they offer free tours of their facility. Since my kids go back to school next week, my wife and I thought it would be fun to take our boys to tour the factory, have lunch, then put new tires on the race car while we are out there!

Our guide, Claudia, was very informative and friendly. We were guided into the facility, and started with a short video about the company, in a conference room. The video starred Andrew Zimmern, of the TV show, Bizarre Foods. In it, he touched on many interesting facts about the company.

The company was started by David Tran, a Vietnamese immigrant, who left Vietnam on a freight ship, the Huey Fong, in 1978. When he started his chili company in 1980, he named it Huy Fong, to remind him of his struggles to get to the U.S.

He was a chili farmer in Vietnam, and made chili sauce there. Once in America, he started making his sauce in Los Angeles. He named it SriRacha sauce, after a beach city in Vietnam. The rooster on the logo, comes from the fact that David Tran was born during the Year of the Rooster. The green tip, is to look like the stem of a chili pepper.

After the video, we were taken into the spotless factory by golf kart. Claudia explained that the jalapeños are grown solely at Underwood Farms, in Fillmore, California. The peppers are harvested only 4 months of the year, from about Labor Day to Christmas. The peppers often arrive at the Irwindale factory about 3-4 hours after they are harvested, adding to the freshness of the sauce. During these 4 months, they have to grind up enough peppers to last the entire year.

Peppers arriving at the factory

The peppers arrive by truckload, to the facility, where they are cleaned and ground within hours of arriving. Underwood Farms, the only supplier of Huy Fong peppers, started growing peppers in 1980, with 50 acres. In 2014, they were growing 2,000 acres of peppers for Huy Fong, their only customer.

These barrels are filled with chili ‘mash’ – ground peppers, with only salt and preservatives.

The place is so clean, I would bet you could eat off any surface in there. Since I went, I’ve had many people ask me if my eyes or nose burned during the tour. My wife, kids and I can all attest, absolutely not. Strangely. You would think that you would get SOME smell, somewhere, but really, no. Those blue, storage barrels, are made on site.

Nice to know they have a sense of humor!

Yes, in November of 2013, they were forced to shut down for about 6 months, and yes, 6 months later they reopened, after the city of Irwindale dropped their lawsuit. From experience, the same thing happens to racetracks, when people buy houses by racetracks, or airports for that matter, then complain about noise.

Starting with basically nothing, Mr Tran now has an $80 million per year business. The factory makes its own bottles, and it is very interesting to watch. I will post some videos on the PH4L Facebook page later ….. Bottles are created in one machine, slide down a conveyor belt, then are filled with sauce within 60, maybe 90 seconds.

Much in the same vein as Tabasco sauce, which is made with peppers, salt and vinegar, SriRacha sauce is made simp,y, using only peppers, salt and garlic. No artificial colors or flavors. That seems to be a big part of it’s attraction. 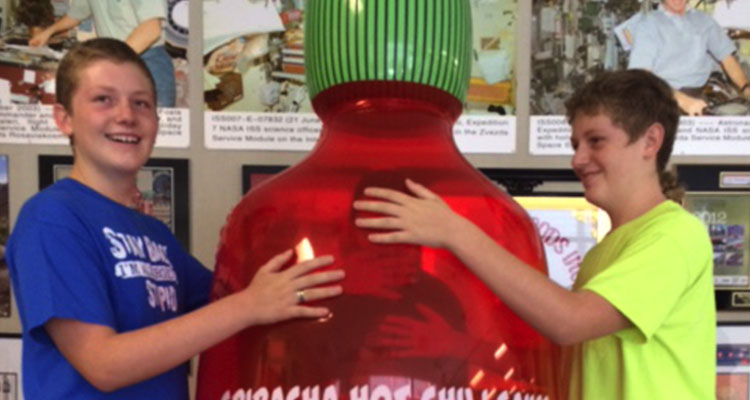 Claudia told us that the owner does come to the plant on most days, and as if on cue, Mr Tran drove by us in a golf kart, carrying a pallet! (I wasn’t able to get my camera turned in time!)

Our last stop, was the gift shop. They had many t-shirts, stuffed animals, inflatable bottles, popcorn, and a few different styles of sauces.

Again, these were not for sale, but my family and I discussed the logic of fighting a fire with hot sauce.

Tours are offered on Monday, Thursday and Friday, starting at 11am. The tour took about an hour. Compared to the $100+ for a person to see Disneyland, this was a more entertaining / informative way to spend an afternoon, especially if you visit the nearby Donut Man afterwards.

Lastly, you get a free souvenir. If you bring your wife and 3 kids, you get all this! One for each! 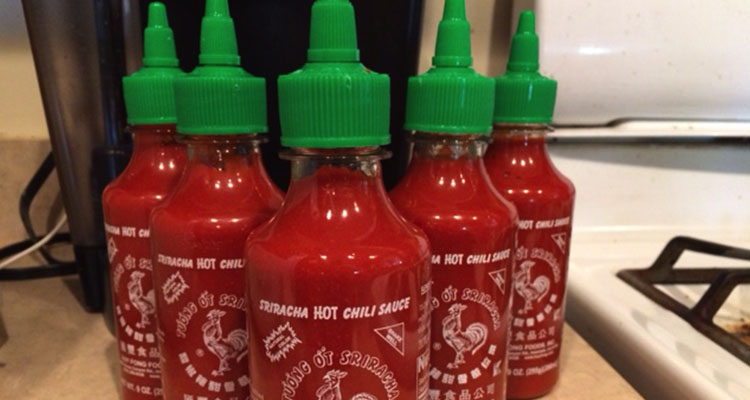 Visit HuyFong.com to schedule a tour or to purchase from their online gift shop. Enjoy!

Article Name
Huy Fong Foods Sriracha Factory Tour
Description
Tours are offered on Monday, Thursday and Friday, starting at 11am. The tour took about an hour. Compared to the $100+ for a person to see Disneyland, it's an awesome deal for the family.
Author
Tom Ryan