This has been long overdue, but a couple months ago I had the privilege of sitting down with local hot sauce entrepreneur, Conan Herring, owner of Howler Monkey Hot Sauce. We had some wings, some beer, and an awesome chat.

What followed was such an awesome discussion about history, inspiration, and just a great talk with a cool dude. We talked for about an hour, and it ended up being so good I have to split it up into two posts. I hope you enjoy and if you get the chance, check out their sauces, they’re one of my favorites.

So Howler Monkey, the company, the name, where did it come from?

The idea behind the hot sauce came from a traditional hot sauce that you find on tables in Panama called Aji Chombo. And basically, you go to the country of Panama, you eat somewhere, you go to these restaurants, and you either have well-known brands you find in the grocery store or the sauce these guys make in the back kitchen. It’s either called Aji Chombo, Picante, or Chombo Picante. Things like that.

Essentially, the recipes came from the West Indies when they were building the Panama Canal and all the workers were being pulled from those islands… Barbados, Jamaica, Trinidad etc…

From the pepper belt?

From the pepper belt, exactly!

So they came into Panama and with them they brought their peppers. So that’s really how the plant got there. The Aji Chombo is actually what they call the pepper that grows there and to the best of my knowledge and everything I’ve researched to figure out what kind of pepper it is, it’s probably a cross breed of Habaneros and Scotch Bonnets.

Whether it was Scotch Bonnets that first came, or Habaneros, Whatever… Or what was there in Panama…

The Scotch Bonnet are in the same family tree once removed. The Aji chombo, I’m not sure if it’s one or the other, or if it’s some kind of hybrid of the two. You know what I mean?

It’s similar to one, I think, that you find in Haiti called a Peek-a-Boo pepper.

Piman Bouk, I think, is what it’s actually called. It’s the same thing, where it’s basically been identified as a cross breed between Habaneros and Bonnets.

So anyways, back to the actual sauce itself…

Since those guys showed up in the early 1900’s, they brought these peppers, and that’s when I think the recipe actually started to kind of come together.

Years before, we were messing around in the garage, we had a little pretend band called The Howler Monkeys, and we were like “You know what? Let’s just run with it!”

When you taste some of our hot sauces, they’re very similar to some of the Jamaican Scotch Bonnet Sauces you’ve probably tried before or some of the other island sauces.

Although the recipes vary, these sauces became the staple Panamanian hot sauce.

We both moved to Jacksonville (Florida), so we’re going back and forth from here to there for vacation and such, and every time what are we doing?

We had our favorites, you know, there’s D’Elidas, a very well known brand in Panama and it’s actually starting to make a little bit of a wave up here.

We recently discovered somebody is co-branding it and calling it Faraon, from a hot sauce distributor out of California.

But anyways, that’s like the bread and butter. The grocery store one that’s very, very popular. It’s been around since like 1915 or something like that, the family recipe or whatever.

Anyways, our favorite was from this guy named Gilberto, Gilby for short, who was a bartender at the Elks club in Panama, had been a bartender for 40+ years and he made his own recipe. He was of Jamaican, West Indie descent. His was our favorite one.

That was your favorite Aji Chombo?

That was our favorite Aji Chombo hot sauce. So basically what we did is said “you know what? We should start making it up here!” You know, we wouldn’t be the first ones to make it. Everybody who has Scotch Bonnet, Habanero, or Aji Chombo peppers from Panama makes their own version of sauce.

So we were like “Why can’t we make it up here?” like, the Panama sauce that you can find in the U.S., right? That’s kind of how it branched out.

So the name, Howler Monkey, how hard was it for you guys to decide on that?

Well, the funny thing about the name was, the original name we thought of, came from my time working in corporations. We sat in front of a pad of paper and started writing things down. It was like “nah, I don’t like this one, x or whatever.”

Our first run at it was going to be Panama Red. We wanted to call it that first. We were going to try to do Aji Chombo, but that’s like trying to patent “green pepper,” “red pepper,” or “Habanero,” or something like that.

So Panama Red was our first idea, and we started to steer away from Panama red because of the connotation with reefer. You know, refer madness. We didn’t want to ostracize part of the hot sauce community who wouldn’t buy it because of that.

So low and behold, just out of pure coincidence, we were on to something, because somebody bottled something called Panama Red about three months after we did over in California. That’s a sauce out there right now you can get, based on the same kind of ingredients, the same kind of concept, Panama Hot Sauce.

So Howler Monkey came from the Howler Monkeys that are in Panama. My partner Tom actually grew up in a town called Gamboa, which is on the actual canal, and it was full of Howler Monkeys. So you’d here em’ in the morning, you’d hear em’ on the way to school. That sort of thing.

So Howler Monkey, we kind of threw out there. Years before, we were messing around in the garage, we had a little pretend band called The Howler Monkeys, and we were like “You know what? Let’s just run with it!”

Awesome! Well that was like my first few questions all summed up right there.

Conan and I had a lot more to talk about. The history of the company, Panama, and of course, Aji Chombo Peppers. Check out the rest of the interview in part two tomorrow!

Check out Howler Monkey Hot Sauce in the mean time! 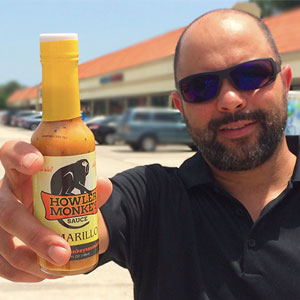